Warning: count(): Parameter must be an array or an object that implements Countable in /home/customer/www/everestassistance.com/public_html/wp-content/themes/travel-agency-pro-child/functions.php on line 1358 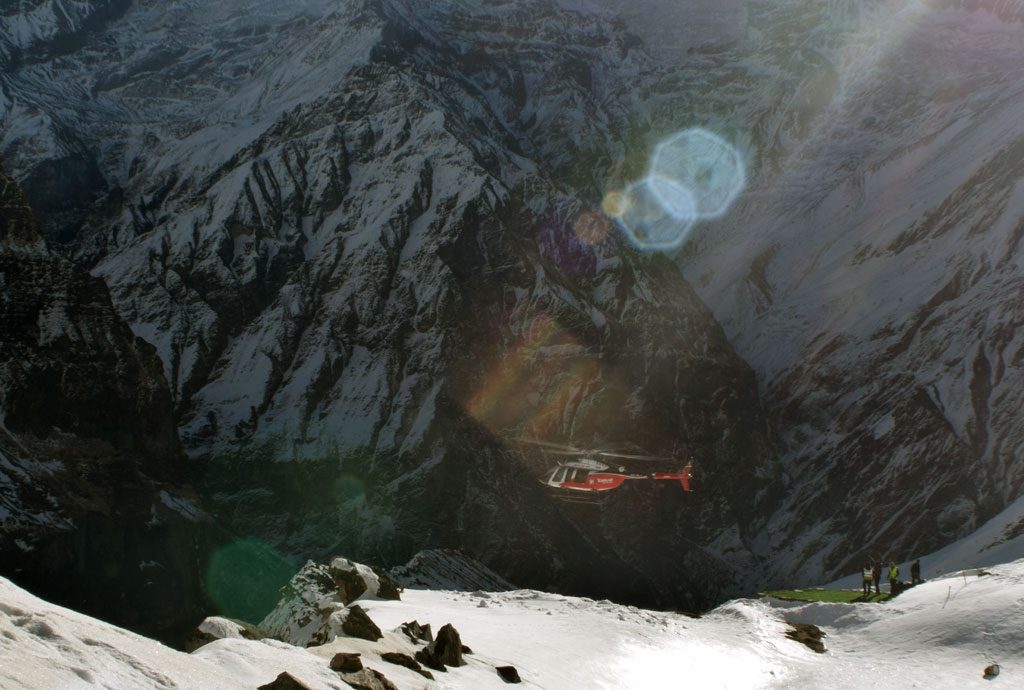 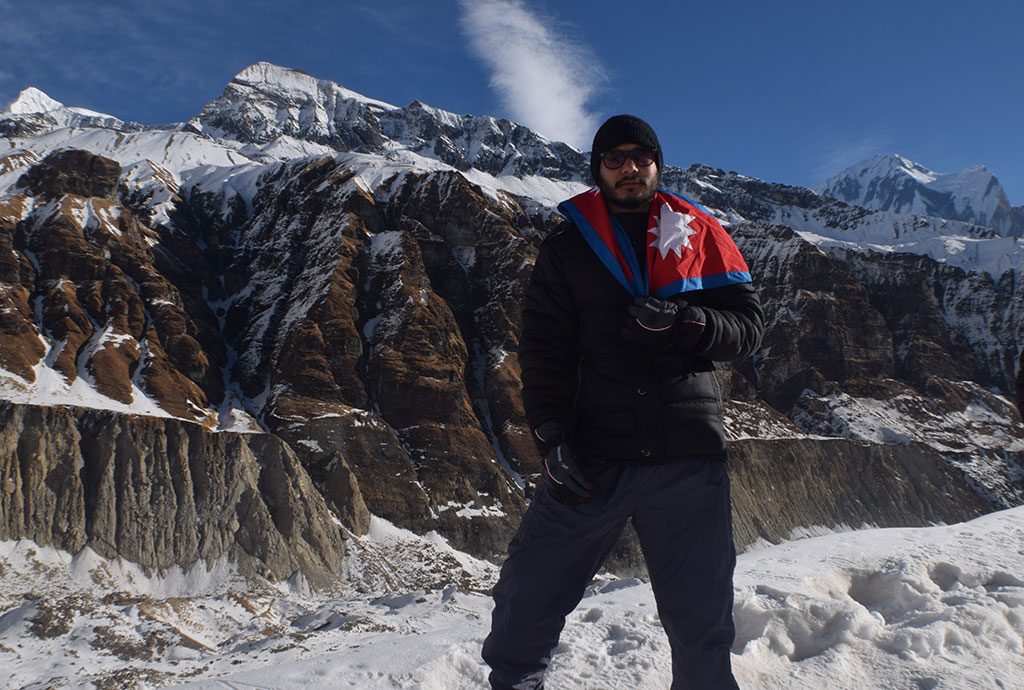 The view also includes other giant mountains like Mt Machapuchare, Mt Gangapurna, Mt Hiunchuli, Mt Khangsar Kang. Other than peaks the snowy terrains are also equally vigilant to observe. You’ll stand at the center of the heavenly surrounding. If you are a 5 A.M person, you can strike the stunning sunrise view.

A while before reaching Annapurna Base Camp, this trek starts from the tourist hub, Pokhara. Pokhara is the touristic place of Nepal where you can enjoy the lakeside outing, cafe hangouts, and views of far resting peaks. And from there, it’s all about nature and culture.

You’ll march on by crossing the green and dense flora filled routes and exploring the settlements near them. The Annapurna region is rich in natural vegetation, the forests filled with Rhododendrons, Oaks, and Bamboos. Whereas the villages filled with Gurung communities are observable. The culture, lifestyle, and food of theirs is totally exotic to explore.

The routes are steep and hilly hence demanding the average level of fitness. On this trip, you will have to push yourself one way only while trekking. The other way is not a micro sweat dropping, you’ll hop into a helicopter and there you are in Pokhara within the half-hour.

You’ll fly like an eagle in the sky by enjoying the scenic views of the world’s most beautiful topography. Not to miss it, the way back from ABC is a wonderful experience that you’ll add to your memory gallery.

Best Season for the Annapurna Base Camp Heli Trek 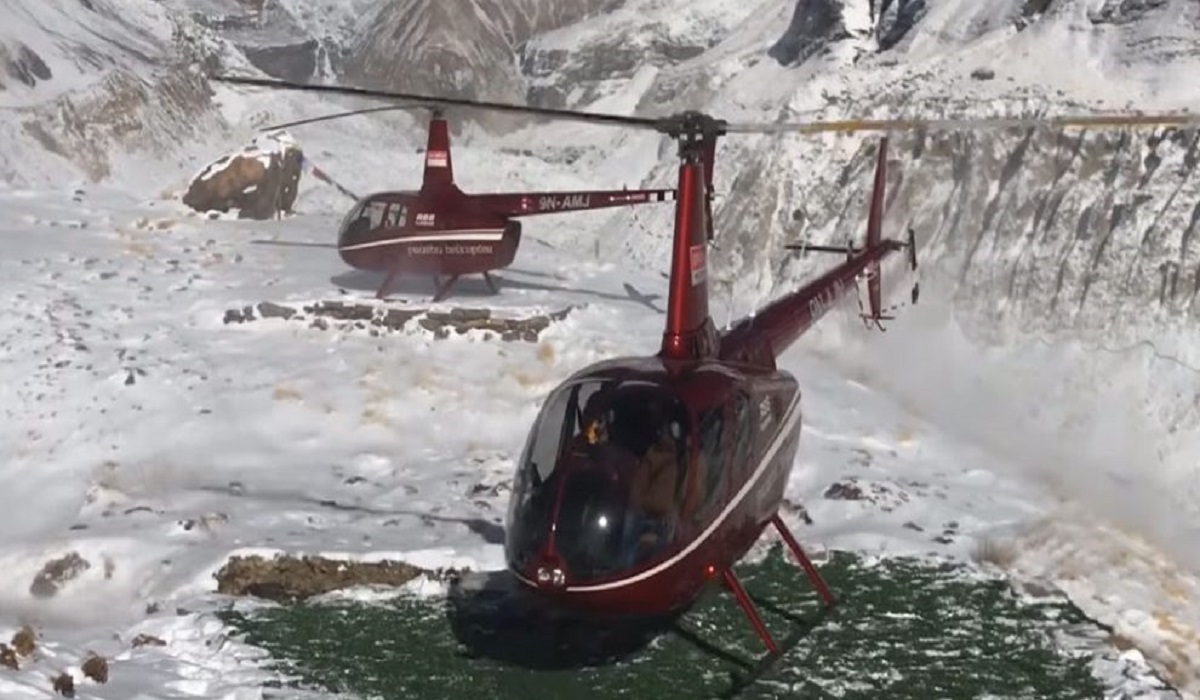 The temperatures during these seasons are bearable with the right clothing. However, the temperature of the higher region is always cold, colder than the lower region.

Whereas, Winter and Summer seasons are less crowded. Only a few adventurers choose these seasons to travel to Annapurna Base Camp. The trails are less crowded and the views are also different from the peak season like Autumn and Spring.

Soon before your arrival at Kathmandu Airport, our team will be there to pick you up. And after your arrival, you will get the hotel transfer by our representatives. Check into the hotel and rest after a long flight. Overnight at Kathmandu.

From here, you will start with the tour to the World heritage sites of Kathmandu.

Cultural sites like Basantapur/Kathmandu Durbar Square, Pashupatinath Temple, Swayambhunath Temple, and Boudhanath. These sites are the must-visit places of Kathmandu city. And after the worthwhile visit, you can use the remaining time for trek related shopping. Overnight at Kathmandu.

Let roll-on, You’ll leave Kathmandu for until next time. The scenic bus ride to Pokhara will start from Kathmandu. It will be 6 hours of bus ride over the Prithivi Highway. The ride is scenic due to the views of green hills, serpentine rivers, and afar peaks.

After the beautiful drive, you will reach the most beautiful city in Nepal, Pokhara. It is a tourist hub, streets full of tourists. After the check-in, You’ll wander around the lakeside and other happening places. Pokhara is the major tourist destination in Nepal, you’ll explore as much as of Pokhara that you can in half a day. Overnight at Hotel on the lakeside.

Soon after your breakfast, you will join a taxi ride to reach Nayapul. After 2 hrs of a taxi ride, you’ll reach Nayapul and there your trek will start. The trek to reach Ghandruk before dusk. You’ll cross Birethanti village and several other Gurung settlements before entering Ghandruk.

Ghandruk is the main stop of this trek that is mainly inhabited by the Gurung. It is a gateway to the famous Poon Hill Trek. From here you can enjoy the dramatic views of Mt Machapuchare, Mt Annapurna, Mt Gangapurna. Overnight at Lodge of Ghandruk.

On this day you will start the trek Ghandruk by following the sides of the Modi River. Then leaving the banks of the river, you will ascend towards the big stone hill. And climbing it you will cross a small bridge of the Kimrong river. You’ll walk on a steep hill, Jhinu Danda, which ends at Chhomrong Village.

Leaving the Chhomrong you’ll enter into the forest of Rhododendron, Bamboo and oak forest. The forest trail is pretty enjoyable as you will smell nature. Then, you’ll walk till Sinuwa, the final destination of the day. Sinuwa offers a pleasing view and stay. Overnight at Sinuwa.

You’ll start this day by hiking through bamboo forests. After crossing the beautiful forest, Kuldihar, you will descend towards Bamboo(2310). In Bamboo, you’ll have a short break and meal in the green Bamboo lodge. From there, you will walk some distance in the dense Bamboo forest until reaching a steep hill. The steep hill climb will display some streams, water showers.

After making it to the hilltop, you’ll cross a wooden bridge to continue walking towards Deurali. You’ll then walk by enjoying the view of the fishtail shaped peak, Mt Machapuchare. When reaching Deurali village, you’ll have already passed over trials full of faunas. Overnight at Deurali.

This day will fulfill your long-burning desire of standing at Annapurna Base Camp. You’ll start marching through the river bed of the Modi River. Ascending side by side, you will join the steep hill to reach Machapuchare Base Camp.

Machapuchare Base Camp provides the awe-inspiring views of snow-filled mountains. After hiking via routes of Annapurna Sanctuary you’ll finally reach your ultimate destination. Annapurna Base Camp(4130m), resting ever since thereby providing close views of the mighty peaks.

You’ll enjoy the scenic and close 360 panorama view of the snowy terrains and mountains. And, You’ll not regret after reaching here and glancing at the peaks. You’ll find Annapurna Base Camp Trek more worthy here at the base camp. Overnight at Annapurna Base Camp.

The climax of Annapurna Base Camp Heli Trek is close to its end. After spending a wonderful night at the Annapurna Base Camp, the day to return back is here. You’ll wake up early to observe the most scenic sunrise and view of Annapurna massifs. This particular morning will be the best of all other mornings of yours. Then after the view, you’ll enjoy delicious breakfast at the footstep of Mt Annapurna.

Next, you’ll summon the trip by joining a picturesque Helicopter ride. The helicopter will take you from the Annapurna Base Camp and in 40-minutes you’ll land back at Pokhara. The entire seconds of a Helicopter ride are wonderful. You’ll enjoy a bird’s eye view from up there, by gazing at the mountain and terrain views. After reaching Pokhara, you’ll be dropped at your hotel at Pokhara.

Nepal 11 Days
$4,620
Everest Base Camp Heli Trek gives you the opportunity to experience two activities in one. It combines both trekking and helicopter tours in the same...
View Details
Available through out the year:

Nepal 7 Days
$3,750
Everest view heli trek is one of the best packages for those adventure lovers who do not have enough time to explore the Everest base...
View Details
Available through out the year:

Nepal 7 Days
$2,160
Langtang Heli trek is one of the greatest and best option for the trekkers who would like to explore the Langtang National park and its...
View Details
Available through out the year: